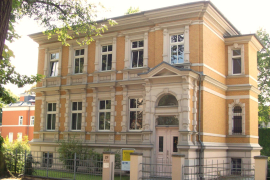 Forerunner company of Environmental Technology Magdeburg GmbH was founded in year 1867 as royal prussian shipyard in Magdeburg. In this shipyard more than 1000 river boats and passenger ships were built up to 1972. In this year the yard was rebuilt to a company for dedusting equipments. Company „VEB Entstaubungstechnik Magdeburg“ developed to one of the leading suppliers of dedusting technique of the former state GDR.

In the year 1990 – after finishing of his studies – Dr. Magnucki began his professional activity as design engineer for bag filter and electrostatic precipitators. He worked in this company up to the year 2002 and became director of whole departement of plant construction. So he was responsible for marketing and project planning / calculation, for construction and purchase, for assembly, implementing and service.

In 2003 Dr. Magnucki began his self-employed activity and in 2005 he founded Environmental Technology Magdeburg GmbH. With foundation of company ETM GmbH tradition of dedusting installations for plant construction is continued in Magdeburg, since company Entstaubungstechnik Magdeburg GmbH“ has meanwhile established its activity on this field. Most important employees of this company now belong to the staff of ETM GmbH.

In the almost past 10 years of business activity ETM has continuously expanded its market position. We have established a constant growth especially in the steel industry sector and also managed to realize several important reference projects in the field of waste incineration and biomass gasification and incineration, making the ETM an established participant on the environmental technology market.